As much as I love gardening, it does swallow a load of time. My garden's breaking out in sunflowers.

I'm feeling well, now that I've found a solution to my sleep disorder: who knew that changing one's house around -- so that the "bat cave" is now the study, the study is the bedroom, and the bedroom the guest room -- would make such a difference.

Busy though. I've written a new children's story which I'll send to a publisher soon.
I've been doing the fiction editing for the SWG literary journal spring.
I've received an invitation to read in Portland, Oregon, so I'm trying to figure out how I can swing that.

I've had reports to write, and mice to trap in the garage. There's been a tonne of tick-picking. A little hammock swinging, and a fair bit of reading.

I bought these incredibly sexy slippers at a yard sale in St. Benedict.

And there have been invitations to dinner and parties ... oh we do like that.

There's been company, including my dear friend and running partner Donna: 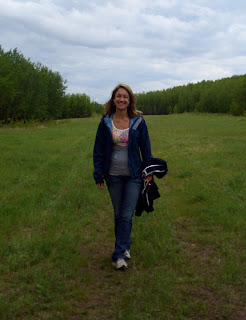 And Logan and Taylor were out with their partners. 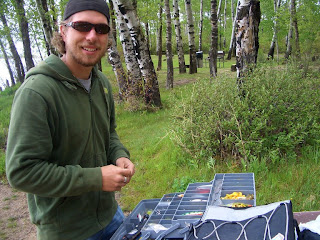 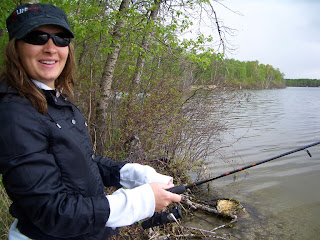 And after fishing, pellet gunning, a log finding mission, campfiring, and playing an acting game I made up called "Ring Ring," it was a new day. Not sunny. Not hot. Certainly not a good day for snakes, but away we went. 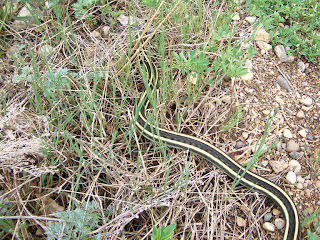 Another weekend, and this time I'm city bound. 'Tis a far cry from snakes and rubber boots and timber wolf scat 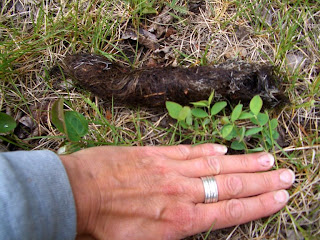 The kids are here with their partners, and all are down at the lake with their fishing rods in the spitting rain. I like the sensation of creating pockets of solitude with a weekend of company.

Last night Logan, Taylor and I went into the bush and dragged logs back to the house. (Tick count: one.) There was a campfire, and a phone left in the rain.

This morning Taylor's partner, Megan, cooked up a dynamite brunch. We listened to commercials the kids voiced when they were 4 and 6 years old, and I worked for CKOM and C95 Radio.

Pictures may be forthcoming. And hopefully, fish.

Ah, rain coming down harder now, and I haven't even taken them on the snake walk yet.
Seven snakes yesterday. Six big ones.

Au revoir, for now.
Posted by Shelley Anna at 10:25 AM No comments:

I wake every hour through the night, often more than once. Just after 3, and it's already light.

Is it the red wine at dinner? The morning's strong coffee? I'm positively jacked.

When the birds start up, again not long after 3, I close my window. Hot once more, there goes the afghan, the comforter, the blanket, the University of Saskatchewan Huskies sweatshirt, the pajama bottoms. Minutes letter I'm shivering, and the layering begins again.

There are books and literary journals beside the bed. Should I? I open the latest issue of Grain. It's the best issue of this particular journal I've read in years. The new fiction is so good it's intimidating. And I've never heard of these writers:
Avi Silberstein ("Strings"). He's "a librarian at the Greater Victoria Public Library."
Krista Foss ("The Longitude of Okay") ... from Hamilton, ON.
Kathy Friedman's "The Longest Night of the Year" -- how's this for an opening line:

"Teagan Lumley awoke early one morning to find that sometime during the night her older, more daring sister had spontaneously combusted."

Kyl Chhatwal (this is not a typo) has penned a dandy, titled "Angles in their flight." Who is Kyl Chhatwal? "A columnist with the Kitchener-Waterloo Record, and a sometimes actor." From Cabbagetown, Toronto.

Jim Johnstone (" ... holds a Masters of Science in Reproductive Physiology from the University of Toronto ...") has a poem called "Abbatoir Ghazals," which contains this gem of a line:

"Darling, the composer has stepped into fire. I can
hear the music in his hands, burning."

You see, writing that like that of the above gets me damn excited. I need to read in order to write. Sure, I'd prefer not to be reading at (I check) .... 5:12 a.m., but maybe that's the ticket. Maybe I should start writing in the wee hours. I've a Mexican writer friend, Andres Acosta, who does much of his work when he's in that semi-conscious dream state. And it's freaking awesome.

I've never been a good sleeper, but things are now completely out of hand. Is it age? I hear you don't need as much sleep as you get older. But I do need it, I know this. My skin's starting to buzz a little, the way skin can when one is super-tired, in an airport, say, or in a hospital waiting room where you've sat all night -- through the screaming and sirens, the bawling babies and overdosing teens -- waiting quietly, bees beneath your skin.

Once, a few years ago, I was involved in the CBC Poetry Face-off in Regina. Coincidentally (or not), my daughter (poet\artist Taylor Leedahl) was also one of the competitors. I didn't want to do it. I agreed because CBC producer Kelley Jo Burke has been so good to me over the years, and I didn't want to disappoint. I did it because Taylor wanted me to, and I wanted to be a good mother.

I wrote "The Insomniac Courts the Moon," and read it in a beat poetry style while -- damn, I'm sorry, dear, I forget your name (it's the sleeplessness) -- anyway, while an amazing guitarist from Regina played along.


The insomniac courts the moon

its tawny eye, a drunk weaves

down Main on a banana bike.

Here’s to a good hotel

in a bad part of town, where salesmen

and mid-career poets are put up. No one else

on the sixth floor, the clearing

a mouth makes in window-frost.

Earlier, after your reading,

gave you her handmade chapbook

There were moments tonight

when they all got it,

even the three children,

by your last-minute arrival

Not a whole poem, of course, but lines

of it. A few words or syllables, that high-

Now moon time, and no one

in a marzipan sky; October’s bullet

or communion. And February: can’t find the moon

for snow, all this white on white

on sheets of no sleep again.

And what is sleep, but a black button

dangling from a thrift-store coat

in the midnight closet, glove on a hand
that needs touch? Or algebra,

the child in new wire glasses

hunched over the textbook problem:

If Joe’s driving to Estevan

at sixty miles per hour

with a quarter tank of gas, when

Not at the library. Behind the podium,

but the mind snagged on memory:

you were four fingers held up,

of letters from a thick red pencil

at the arborite table, your mother

against the counter, smoking

All the roads on your map

lead to the slow clock of her heart

stopped at a thundering:

As long as that wasn’t your father,

she said, but this was

the sound of your father, falling

off the roof through laddering sunlight,

his back gold-starred with leaves.

In the ventriloquial country of no sleep,

tires crush what they can; addicts

rich with empties, drop a few

for the percussion they make on cement,

and is this not urban poetry?

who shattered the exiguous spell.

We're all in this fraud together.

That may not have been it exactly. I'm certain it's been revised since it was performed, lo those (checking cv) ... 3 years ago. (And the line and stanza breaks got completely buggered in the transfer). But you get the idea. Me and insomnia, we've been holding hands for decades.

Hey, here's something: minutes ago, when I got up to retrieve my laptop from the dining room (of late, I seem to have abandoned working at the desk in my study for the expanse of the dining room table) and bring it back to bed, I noticed that [the morning] smelled like winter. Winter!

Maybe I should stop drinking (anything) after a certain hour. I have one sip of water, and it's good for 5 noctural trips to the bathroom. What's up with that?

5:35 a.m. In three hours (count 'em, Shelley) I expect to be on a country road (the one I call Frank Winkel's road) running 10K. I love that I can run again (achilles tendon healed). Not bragging, just a fact: I get more exercise than anyone I know. Shouldn't that account for something? Shouldn't that just knock me out for a good 7-8 hours every night? (It should also make me skinny, and doesn't.)

And then, in this season, there's the added fun of ticks. In bed I feel them crawling up my neck, my legs, but each time I check: nothing. (Oh, but there will be ... my record last year was 9 in one day. Bet I can top that this year).

Well, guess I'd better give sleep one more valiant shot tonight (or this morning).

To end, a palindrome: Sleep plees.

Posted by Shelley Anna at 3:57 AM No comments: