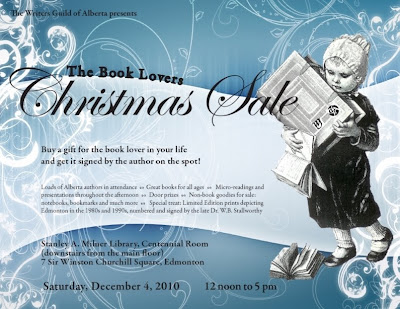 Giving personally autographed books
for Christmas makes good sense.
Book-giving tells the readers
that you've really put thought into what they might enjoy.
It supports artists and writers
(who often live so far beneath the poverty line
it should be a national embarassment).
Books are easy to wrap, store, hide, and send.
They can be read alone,
or together,
or in groups (and later discussed).
They never go out of style.
And whether you lose or gain, grow taller or shrink,
you're always just the right size for a good read.
Books entertain, illuminate, educate, and help us
to understand ourselves
and the world we live in.
They make smart companions
on the beach, in bed, on park benches,
in staff rooms, or classrooms, on trains
and planes, and in your favourite chair.
Or bathtub.
Books love to travel
but they are just as happy to stay home.
They're a cheap date.
Or they can say to potential dates:
Look at my owner ... she's fun\brilliant\interesting.
Read a good book
and the characters are your friends for life.
Books have no expiry date.
They can be read over and over and over again.
If you think you know someone who has everything,
chances are he or she does not
have a book signed by a local author.
This year, be creative.
Be original.
Give books for Christmas.
And have a merry and mind-expanding holiday.

Posted by Shelley Anna at 12:57 PM No comments: 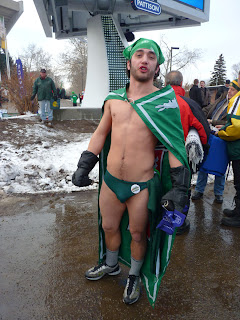 So the Grey Cup is behind us, and the Riders lost to the Alouettes 21-18.

I don't profess to know a thing about football, but I did get caught up in the fever.

We had tickets and sold them (the proceeds help fund a Christmas trip to Cuba), but took part in many of the festivities.

(Left) This guy (from Southey, SK) never did put his clothes on. Brrr.

We went downtown on Saturday, and it gave me a kind of thrill to be in a crowd of that many Saskatchewanians. At one point Greg and I were at the Spirit of Edmonton venue, standing on the dance floor with beer(s) in hand while a live band did a decent rendition of a Tragically Hip classic, and I looked around at the happy-go-lucky, costume-wearing, well-lubricated crowd and said: "This room full of rednecks ... these are my people." 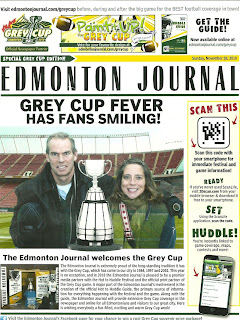 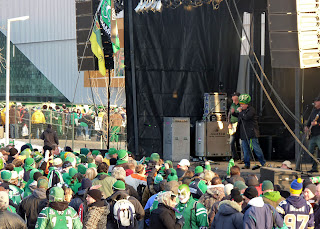 (Above) Trooper performs. Not quite the band they were 30 years ago.
I kept my eyes open for anyone I might know, but say only two people all weekend: writer Warren Cariou and his wife, Alison Calder. 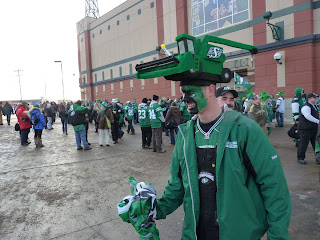 For me, the weekend was less about football and more about people. I'm such a social beast. I loved finding out where people were from.

(Left) I call this guy Tractorhead.
He lvies in Edmonton now, but is a smalltown Saskatchewan boy. 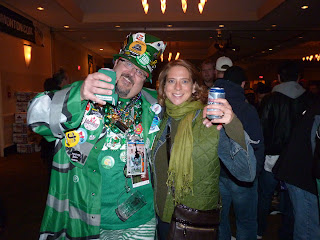 (Left) This jolly Rider fan is from Carlyle. We met him at the Spirit of Edmonton venue. 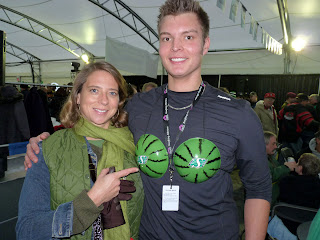 (Above) This young feller was bartending at one of the Huddle Town venues. We saw much creative use of melons. 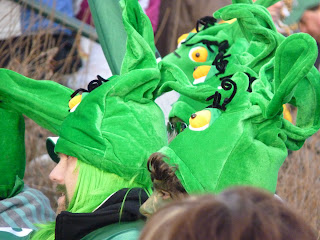 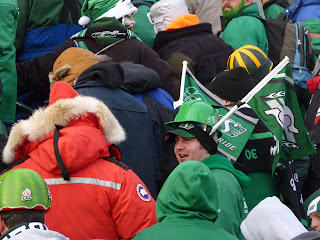 (Below) A family affair. 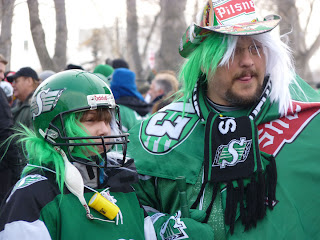 This guy (below) was watching Trooper and doing yoga moves. 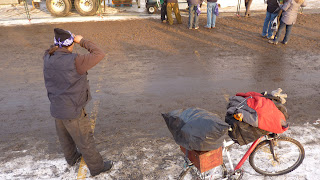 Now here's a story. We met this headressed fan (below) in Huddle Town, and learned he's from Beechy, SK. I said, "Oh, well then you must know my friends Glenda and Sharon MacFarlane," and he said, "I sure do ... I'm tweeting Glenda right now ... I'll send her this photo!" 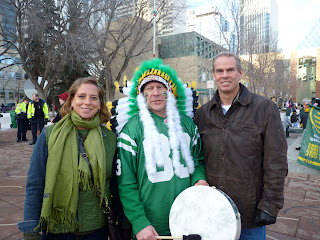 I had no idea who this TSN reporter was (below), but was mesmerized by how much she resembles Barbie. 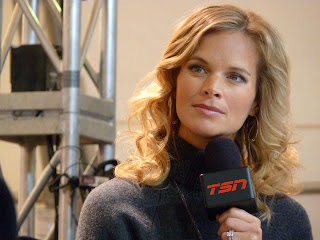 Tatting the pride (below). 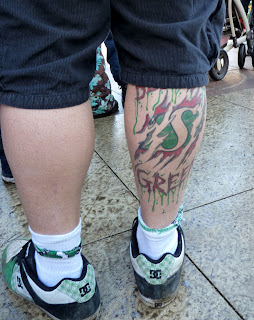 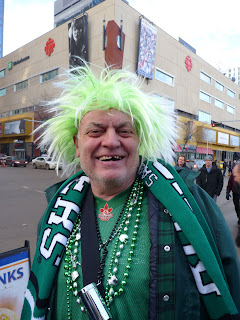 (Above) Another happy Rider fan, in the line-up to buy a hogie.

(Below) Greg looks like he's trying to get away from Jennifer Hedger. (He wasn't). 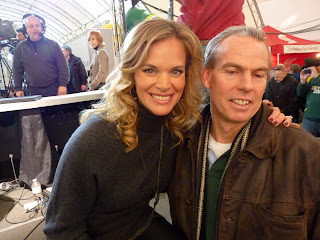 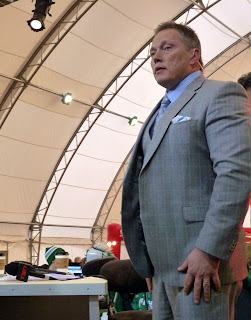 (Above) Also from TSN, Darren Dutchysen.

So, after watching the Grey Cup, I confess I'm not much closer to understanding the rules of football, and I found myself day-dreaming through some of the game.
But still, how interesting to live just a few blocks from the stadium. We could see the Snow Birds fly overhead on TV and looked out our window: there they were. When the helicopter cameras panned over the stadium and surrounding neighbourhood, we knew that one of those little white lights represented our house (in the middle of our street).
They say there were 100,000 SK fans in Edmonton. That 10% of the population. All I can say is Wow.

Posted by Shelley Anna at 7:12 AM No comments:

Of a night in November.

Making a house a home (office). 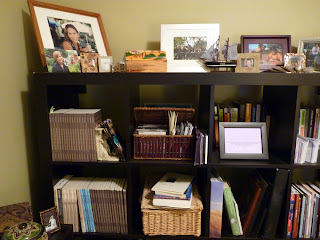 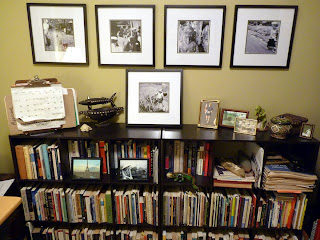 Just finished Camilla Gibb's The Beauty of Humanity Movement (novel, 2010, Doubleday). Greg bought this book because of its Vietnam setting, and I got to reading it first. Gibb is a young (b. 1968) but highly celebrated Toronto writer who holds a Ph.D. in social anthropology from Oxford. An earlier (bestselling) novel, Sweetness in the Belly, was a Giller finalist and won the Trillium Award, among others. (In other words, she’s a smart and talented cookie.)

This story concerns art, history, politics, literature, food (namely the Vietnamese soup, pho), poverty, love, and contemporary life for young Vietnamese. I found it moving, informative, and -- like a good bowl of pho -- most satisfying.

The text is richly descriptive, ie:

“She’s remembering that winter morning with her mother in Minneapolis when they lost all contact with Vietnam. The snowbanks were the size of elephants that day, the sky bright,flakes swirling around them as if they were figures in a shaken snow globe.”

The characters embedded themselves in my consciousness. I cared about them. I wished them well.

The pacing was bang on, but, that said, I wish I could have got to this more often than I was able ... it would have been better to read it over a week rather than the two weeks it took me. One loses the story a bit ...

Now look at how effectively Gibb uses sound as a transition. The scene concerns Old Man Hu’ng, the lead character. (Hu'ng is trying to help the American Vietnamese character Maggie track down information about her father, an artist whose hands were mutilated by soldiers. He later went missing, and she returns to Vietnam with six of his paintings, and high hopes of discovering what happened to him. Hu’ng is a poor itinerant pho maker, living in a shantytown next door to Lan, the woman he fell in love with and has not spoken to in 40 years.)

He lies in the dark, “listening to the gentle patter of rain on his corrugated tin roof ... ” Shortly after: “He falls asleep only to awake startled an hour later, the rain thundering down violently from above, catapulting him back to the time of war. The worst of it was in December 1972, what the Americans called the Christmas bombing ....”

I enjoyed this bit: “It reminds you that you have no attachment to the history or geography of a place, except insofar as you are pioneering your way through it in your own lifetime, your roots buried in some faraway earth.” That word, pioneering. Who uses it anymore? I love it.

She names all the chapters, ie: “Shit on a Canvas,” "An Inverted World," "The Lady Next Door," and "Provenance."

The ending is what I like to call a Hollywood ending, in that things work out. Hu’ng and his beloved Lan reunite, and Hu’ng’s dedicated friends acquire a building for him to operate his business out of. Normally I'm cycnical of these endings, but Gibb elevates the ending with superb writing. The last sentences of the book are transcendent:

“Hu’ng has his moments of wondering whether this is the afterlife or the present life. But then he asks himself, Does it matter?"

Don Cherry: Hockey Stories Part 2. This requires some explanation. I'm actually taping read-aloud segments of this book to give to my father -- whom I clearly remember yelling "Get out of the way!" (of the television) during "Hockey Night in Canada" when I was but a girl -- on CD for Christmas. You see, Dad doesn't see well, so could never read the book, and I don't think he needs a new sweater or more socks. So this is a personal touch, and hopefully the stories will make him smile.

The 2001 movie "K-Pax," starring one of my faves, Kevin Spacey, and Jeff Bridges. Some fine writing in this, and decent acting. But oh the Hollywood ending ... everything came neatly together in a package tied with a bow. Still, worthy of a Shaw On Demand rental on a wet night in November.http://www.blogger.com/www.imdb.com/title/tt0272152/


The writing at the end is worth watching the movie for.

The University of Alberta's Studio Theatre production of "Love and Human Remains," a play by Brad Fraser.

Not sure if I'm getting old, cranky, or discriminating, but I found it excessively violent, gratuitously foul-tongued, and the nudity and simulated sex was just ... well, silly.

Many lines were yelled. The character Benita -- a hooker\mind-reader who welcomed physical brutality and sexual degradation -- was the most theatrical of the troupe, but why the inclusion of many (cliched) urban legends? Ie: car breaks down, boyfriend tells girlfriend not to leave the car while he goes out for help, she hears something on the roof, finds out the next day it's the boyfriend's blood dripping or fingernails scraping (you know the story ... fill in your own rendition) on the roof.

Did I like anything about it? Yes. The understated music was right on, and no one around me was a) crumpling candy wrappers b) texting c) kicking my seat.

Best things about the weekend:

17Km run in the river valley with Greg. My goodness, what a difference a good sleep the night before makes. And cool weather. Love that cool weather.


Today was the most I've enjoyed a run -- long or short -- in months. And I had energy to burn at the end of it.

The Saskatchewan Roughriders won. But what a squeaker. I was busy doing the things I do (today, hanging photographs I'd taken in Indonesia in my ever-transforming study) and only watched the 4th quarter, but holy, did I ever get into it. The yelling. The fist pounding. The elevated heart rate!


Hey, we have six Grey Cup tickets for sale. Contact us.

Weirdest thing about the weekend:

Much to choose from, but I'll go with this ... after cleaning the front flower bed of a quarter of a grocery bag worth of kitty caca (where are all these cats coming from, and why do they so love crapping in our yard?), I liberally sprinkled a concoction of coffee grounds, cayenne pepper, chili powder, and garlic salt over the dirt. Maybe it will work.

Finally, something I've not yet mentioned:

I now (and again) work for Rawlco Radio (after all these years) writing radio commercials. Life surprises, and surprises again.
Posted by Shelley Anna at 7:23 PM 1 comment: