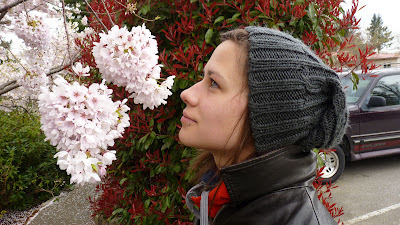 I've not seen her for almost a year ... everything else is on hold.
Posted by Shelley Anna at 8:57 AM No comments:

The first review of Wretched Beast appeared in a recent edition of The Saskatoon StarPhoenix. "Mature" ... "confident" ... "marvellously realized."
I like these words. :)

By Bill Robertson, For The StarPhoenixMarch 24, 2012

Poet and fiction writer Shelley Leedahl was long a resident of Saskatoon before moving to Middle Lake and then pushing on to Sechelt, B.C. She's also spent time in Eastend and in writing colonies in Scotland, Georgia and Spain. She vigorously mines her time in all these places, moving from one to the next like a bee through a garden, taking a bit of experience here and there for each of the poems in her latest collection, Wretched Beast.

This book also finds Leedahl on the move as a parent, wife, lover, friend and, though she doesn't use the word, earnest student of the literary arts, particularly poetry. And it seems the more she moves, sees and learns, the less she's willing to admit she knows. In Lucien Lake I and II she addresses her daughter: "Soon you will know/ the matter with me/ is the longer I go the less I become." This second poem in the collection sounds a note that will be repeated through the poems: The persistence of lack, of less than enough.

In Photograph she walks beneath an arched bridge "where I have stood too long growing older/ and knowing ever less," and in Last Poem from the Adirondack Chair she says, "Listen. Time and self-sabotage/ cannot be stopped." Well, most would agree with the time part. The idea of being sabotaged, however, whether by others or one's self, owes itself to a certain degree of insecurity, with which artists of many stripes seem to wrestle. In this collection, Leedahl wears those insecurities like badges.

But consider the titles: Toward Winter (Saying Goodbye to the House), The Insomniac Courts the Moon, You Leave Again, Affair with an Older Man and the title poem. They chart a hectic course for the heart and for the writing. No wonder she tells us all the reading she's done (Sharon Olds, Galway Kinnell, Charles Wright, etc.) and the poems she's been working at. She reassures herself, and her readers, that despite all her upheavals, she's still at work at her craft. She, and by extension, we, should take her seriously.

She needn't worry. Amid her many poems of goodbyes and finding a new life and the sense of huge longing that's made manifest in all these changes - the starving in Trivialities; the hoped-for intervention in Landscape - Leedahl includes poems that are mature, confident and marvellously realized.

Four reasons why returning to Edmonton would be a bad idea.

(today in Edmonton)
One prismatic reason why staying on the Sunshine coast would be an excellent idea. 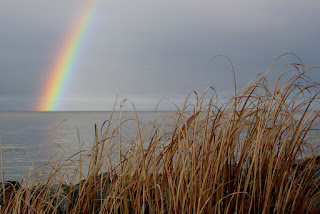 (today on the Sunshine Coast)﻿
Posted by Shelley Anna at 12:20 PM No comments:

Today I believe I was delivered a lesson in Be careful what you're thinking.

After cheering on runners who completed the April Fool's Run (half-marathon between Gibsons and Sechelt), I headed out for a long brisk walk. Imagine a beautiful spring day, the Davis Bay esplanade lit in daffodils, the cheery trees exploding in pink blossoms, and birds on wires singing their prettiest songs.

I was thinking, on this walk, about tensor bandages, and how I can remember where they were kept in each of my last three homes. In Edmonton I had a tensor bandage in a kleenex box in the top of the bedroom closet with a few other items I rarely use, like hair curlers.

In Middle Lake (SK) the tensor bandage was kept in the cabinet above the toilet: a practical place, no?

In the City Park house (Saskatoon) the tensor bandages (there were two) were in the kitchen in the far right bottom cabinet reserved also for paid bills, maps, greeting cards, and craft supplies.

I have been fortunate not to have needed a tensor bandage for some time, but on this morning's walk -- the trees, the birds, the bluest sea -- I was not paying attention and hit the jagged edge of the pavement. Oops. I made meat of fingertips, scraped my right knee, and sprained my left ankle.

We have no tensor bandages in Sechelt.

I considered bothering the strangers in the nearest home and asking them to call Greg to drive over to get me -- about 5km from the house. Or I could put pressure on the foot and try to make my way back; sometimes it's best to get right back on the trail. I did the latter.

Greg was impressed with the velocity and size of the swelling, and grabbed me a bag of ice cubes wrapped in a tea towel.

A few hours later we were running errands and both agreed we'd happily detour if we saw any Open House signs. We did. A wonderful B and B operation called Tucker's Inn. The owner immediately noticed my hobbling, sat me down, cleaned my bloodied knee and wrapped my ankle in a tensor bandage he pulled out of a kitchen drawer like a rabbit from a hat. 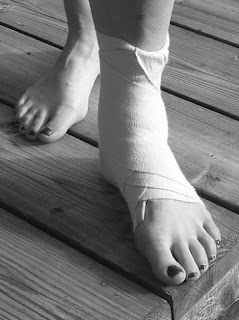 I suppose this means that I won't be able to go for my traditional birthday run. I am 49 years old tomorrow. There are far worse things.

And I shall mind my thoughts.
Posted by Shelley Anna at 6:14 PM No comments: