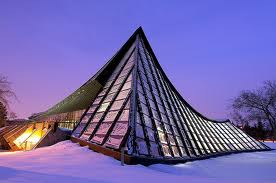 Consecutively. And I had more in me, but water polo players were leaping in, the ropes were pulled.

This is my pool. Peter Hemingway. An architectural delight and just a 12 minute drive from home.

I have never swam this far in one session. It becomes like flying, that sensation of having no responsibilities. Long distance swimming is so much easier than so many other things, and far easier than thinking \ feeling.
_____________________

Last night I needed distraction, and found it in back-to-back movies: one a quiet little Canadian film, "Take this Waltz,"written and directed by Sarah Polley; the other "The Iron Lady," starring Meryl Streep.

The Polley film was brilliant. I could watch this 6 times, 10 times, and never grow weary of it, mostly because of the steamy -- and highly credible -- chemistry between Michelle Williams (bravo) and Luke Kirby, but also because Polley isn't afraid to make characters speak and act like real people do -- often most unusually -- and Michelle Williams was a perfect fit for the lead, Margo. There are laugh outloud moments in this film (ie: when Margo's laughing so hard during a ridiculous water exercise class, she pees in the pool ... the water turns colour, the flamboyant fitness instructor squeals that the pool's been fouled, orders everyone out, and the man (a neighbour who drives a tourist rickshaw in Toronto) who is obsessed with her sees the whole thing. There are sexy moments (easily relatable to moments in one's own life, when one wants so badly to kiss or touch someone, the feeling is mutual, and both parties resist and resist and resist ...). The music was superb, and fine attention was played to colour (ie: segues from turquoise to turquoise.) I appreciated the lead character's quirky wardrobe: was a fine example of thrift store fashions. The last quarter of the film became a bit too self-conscious and fast-tracked (and the menage a trois x 2 were silly), but all in all, I highly recommend this one.

"The Iron Lady," on the other hand, was pure shite. From the ridiculous caked on make-up to the inane script and "framing" of the story through Margaret Thatcher's delusional conversations with her dead husband. We finally had to turn this one off.

Finally, huge congratulations to my daughter, Taylor Leedahl, on the launch of her new poetry book, Hybrid Hibiscus, with Jackpine Press. Taylor launched in Saskatoon over the weekend, and a friend (who knows how paralyzing it was for me to miss it) told me she was utterly phenomenal.
Posted by Shelley Anna at 6:26 PM No comments:

Everything should be white today. 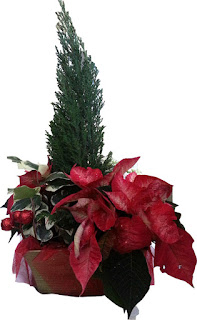 One wakes at times, or simply rises off the floor after nights of not sleeping, and the best she can do is to rinse the dishes, stuff towels into the washing machine.

One wakes thinking: Something good must happen today. Last night, unexpected flowers at the door. Our tenants and friends, Doug and Angela, brought a Christmas bouquet.

I needed that. It was my something good.

Or one makes her own good thing. Borscht, the last of it, from the Saskatchewan beets. Who knows how long it's been in the fridge, waiting for Right now? 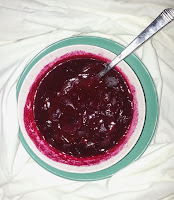 Borscht in close-up resembles an image from "The Walking Dead."﻿

See how easy it is to waste one's day?﻿

Last night I slept beneath my desk, with a comforter bunched around me and the hot air register, in the old way.
I watched travel DVDs that made me want to go to Munich, and Baden Baden.
Last night I wanted to be a girl again, with a bowl of Alpha-bits and nothing ahead of me but the decision of which friend I'd intvite for a sleepover on the weekend.
I thought about buying a new dress for the company Christmas party, but even thinking about it took too much energy.
Last night I felt bad about all the charitable organizations that send me address labels and Christmas cards I never pay for.

I thought about compassion.
About those I will never see again.
About protecting myself.
Today is white and furnace sounds.
How to surround onself in light.

*"new snow, clinging" ... the title of a photograph by Edmonton poet\essasyist\photographer Shawna LeMay.
Posted by Shelley Anna at 12:13 PM 2 comments: 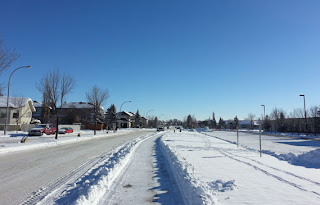 I am spending time in the Foothills, at the home of my brother, Kirby, and his wife, Laurel. That word, foothills, one of the cooler compound words, mais non?

Mid-November. With several events and responsibilities behind me, I am feeling, finally, free; it's a splendid way to ring out 2012. With freedom comes time, and time is what I require -- coupled with space -- in order to feel creative. When busy, I experience life mostly in close-ups and jump-shots. Now it's time for long and establishing shots. Slow fades, in and out.

Today it is -20 C. A bracing day, but the sky is quintessentially blue. So let's go for a walk, then. Right out of suburbia into the countryside. West, toward the mountains. 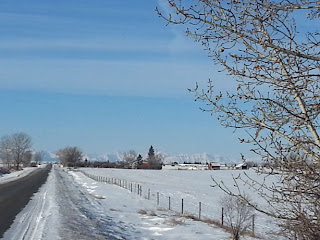 High River is Wrangler jeans and cowboy hat country. We're talking belt buckles, folks. I appreciate the community's big town feel, its proximity to both Calgary and the Rockies. It's become a kind of home away from home for me over the last ten or twelve years.

So I bundle in layers (double socks, scarves, pants, mittens) and walk, and it takes a goodly while, but eventually I become aware. Winter birds. How the cold magnifies the already-loud roar of rugged trucks, with gun racks. (Fortunately there are not many on this road, straight as a knife, toward the mountains.)

I smell the cold, pipe smoke, cows, and -- oddly -- marijuana. Must be a trick of the cold, in the same way that I also momentarily step through Venezuela's blossomy air.

I pass large, block-like prints that could me moose-made, the tiny "bicycle treads" left by birds, mice. Bales stacked in a way I've never seen before: hay wall, straw backstop. 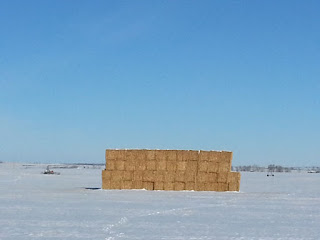 There are horses with so much space around them they might believe they are truly wild. 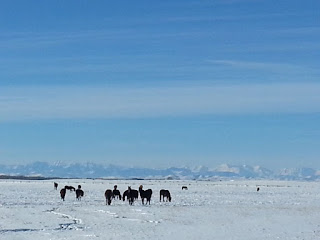 I only feel the cold when I take off my mittens to snap photos. One cannot underestimate the value of a good pair of mittens. Take these ones, for example: 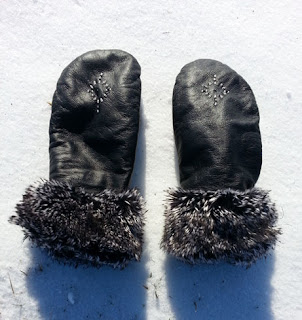 A gift from my mom to my sister-in-law. Beautiful and oh-so-warm. I borrow many things. Laurel's long, hooded coat; a scarf my daughter knitted for her.
And I play with my shadow. 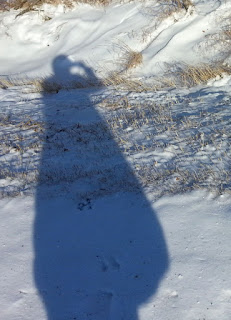 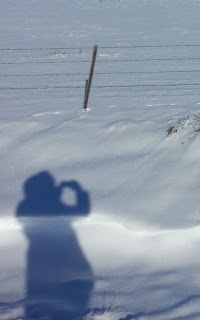 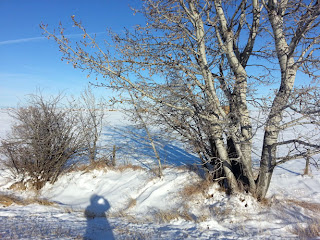 ﻿
I consider the myriad textures of snow.

As my smart phone camera and I are new to each other, we sometimes make mistakes. I think I am taking photos when really I'm making mini-videos.
I believe I'm taking a landscape photo and find the camera's screen's flipped and, whoa, I'm accidently there again, sun on my shoulder, a frosty mane. 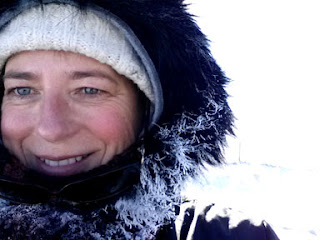 When it feels right, I turn away from the mountains and double back. Everything is new in the other direction. 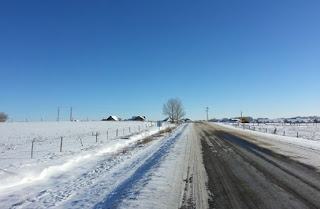 I think so often of where we live, and how. What are the lives -- the concerns, the pleasures, the day-to-day -- like inside the farm behind these trees... 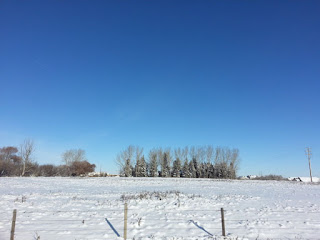 compared to the lives of those who dwell in the side-by-side houses ... 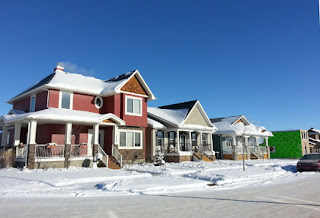 ... around the man-made lakes it would be so easy to mock, but how can one fault a lake -- any lake -- even if it began as a blueprint? 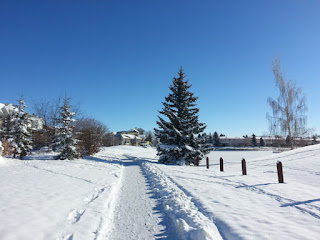 I smile at a sign that warns that parents can't be dropped off. 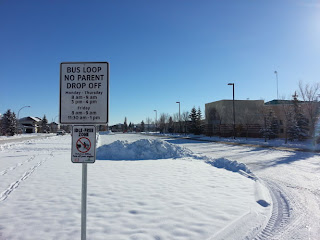 Arts on the Avenue & DC Books

invite you to the launch


The prolific
&
multi-genre Shelley A. Leedahl has boomeranged
back to Edmonton (from BC & SK). She’s celebrating her return to Alberta Avenue
&
the release of her 10th title& hope's you'll come out to meet some of the fictional folks in her "entertaining, thoughtful, & downright sexy book."

Reviewers say: "The voices in Leedahl’s stories are immediate and compelling ... her roots as a poet are evident ... characters are both blessed and possessed with their own brand of neuroses ..." (Books in Canada)

"Shelley A. Leedahl’s characters seem like cousins of friends of friends; the weird and heartbreaking stories that get traded late at night ... pretend the stories happened to a friend of a friend—you’ll be the hit of your next dinner party." (Front and Centre)

Posted by Shelley Anna at 6:21 PM No comments: