but life's been busy, what with the runs (21.6K ... my new record) ... socializing (including una fiesta magnifica con poker) ... house rearranging ... and exploring this ciudad on my own.

Writing? Not so much. But I am beginning to connect with the literary community here, and have now joined the Writers Guild of Alberta.

And speaking of writing, I have an essay ("Road Trip: Why I Write About Saskatchewan") in the forthcoming anthology Country Roads: Memoirs from Rural Canada (Nimbus Publishing).

It's going to be an eclectic book, with contributors ranging from NHL coach Brent Sutter to journalist Pamela Wallin, award-winning Alberta writer Rudy Wiebe, and mucho mas. The book will be launched in May. 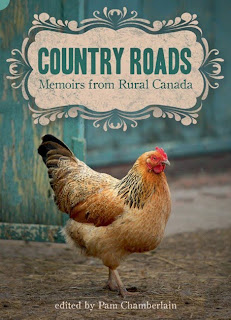 And speaking again of writing -- this just in: Donald Ward, friend and fellow writer, won First Prize in the national CBC Radio Literary Competition, Short Story Category, for "Badger." Don's now $6000 richer, and I couldn't be happier for him. By the by, I was shortlisted in the Poetry Category, for a suite of poems called "Wretched Beast," which is also the title of my manuscript-in-progress (currently under consideration at an ON publishing house). It's a hell of a good thing even to be shortlisted.

[People, please read CanLit. The announcement of the CBC Shortlists and winners are online here:http://www.radio-canada.ca/prixlitteraires/english/shortlists2009.shtml ]

And now the family arrives. Yesterday my brother, Ron Meetoos, enroute to SK from Vancouver, had lunch with me. (Triptych below) 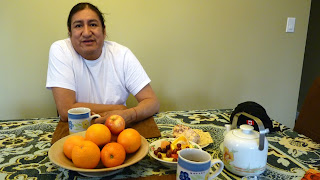 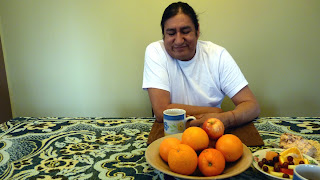 Brother, you ask? Yes, brother. Ron came to live with us in when he was five years old. He's an extremely cool guy. I visited Ron and his multi-lingual wife Elisabeth (she's from Riga, Latvia) when they were living in Paris last year, steps from Notre Dame. And I've also visited his first wife, Susanna, and daughter, Kyara, in Switzerland, a few times.

This weekend, Logan, my soon-to-be 26 year old son and his girlfriend, Kim, are arriving. Oh, joy. Post and photos to follow, no doubt.

Greg will be home in a few hours (but who's counting, eh?) and we're welcoming friends over for a beer. Then a neighbourhood rally. Then a lecture in St. Albert on the subject of art and change.

Take care of each other.
Posted by Shelley Anna at 10:06 AM No comments:

But first: old roses. Glorious how they've weathered.
And they're important to me. Because. 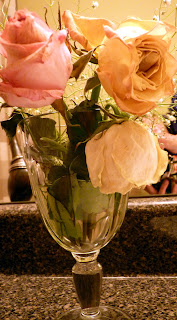 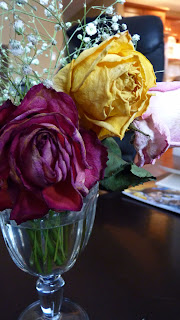 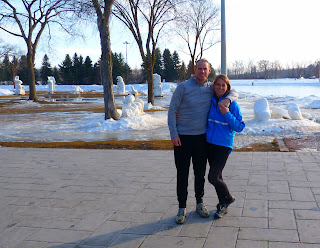 This just in: us after a 2.5 hour cycle in Hawreluk Park (picnic included)
and around the
North Saskatchewan River.
We asked a stranger to take our photo (we like doing things like this). 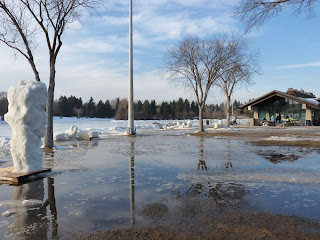 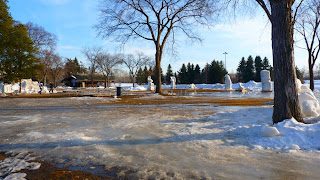 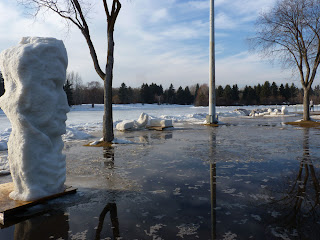 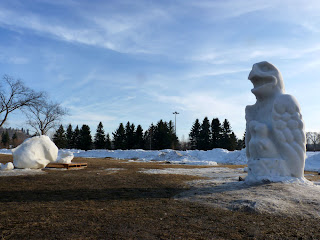 Edmonton, I've learned, has more green space around its river than any other cityin North America, and I'm loving it.
It's like Saskatoon x 30. 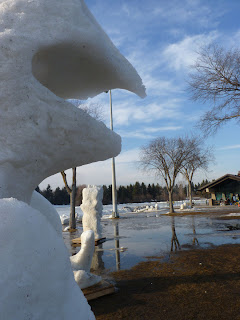 But the weekend was about more than activity and landscape.
It was also about family, friends, and art.
I had the great pleasure of meeting Greg's 14 year old son, Eric (he was in the city for a soccer tournament); and spending quality time with Anna, 16, who joined us for a run this morning.
Greg and I attended an opening at the Nina Haggery Community Arts Centre on Friday, and on Saturday I got together with an old friend from Saskatoon, Melanie Mason; we participated in a sketching class (led by artist\teacher Paul Freeman) at the Art Gallery of Alberta.
We tried our hand at sketching Degas' sculptures.
I have no talent for this, but it didn't matter a whit.
What else? Gold rings.
What else? Pancakes at the Strathcona Farmers' Market, and watching a violinist, cellist, and a man on accordion perform.
What else? Swimming (1500m) at O'Leary Pool, but later in the weekend
discovering the Peter Hemingway Pool
(and knowing I'd found my pool home).
What else? Driving with the top down. (oh, my)
What else? Watching "An Innocent Man" (Gerard Butler and Jamie Foxx) and being pleasantly surprised by this Hollywood thriller.
What else? Soccer.
What else? Going to the movie "Shutter Island," and really disliking it.
(Scorcese ... what the hell?)
What else? Greg, as we speak, making Shepherd's Pie
for our ethnic potluck\party next weekend. I'm lucky ... all I need make is Irish Soda Bread (which I make every week anyway),
but I may also salute the Norwegian and German in my blood).
Much, much, much to give thanks for, eh.
Posted by Shelley Anna at 7:52 PM No comments:

It's been years since I ran this distance, and what's more, had the will and energy to keep going. But I stopped myself. No point in getting cocky, just when the going's getting good.

It's just that the weather yesterday was sublime. And the light ... that late afternoon, gold-sheened light. Painters' light, as I call it. It makes the whole world seem like a fairytale. And we ran above the river, and around cul de sacs, and old mansions. We ran past Concordia Lutheran Seminary, and high above Rundle Park. We said hello to dog walkers and cyclists and teenaged kids waiting on the curb. We splashed. We leapt. We high-fived.

So Edmonton. Who knew? But I'm loving it. I'm embracing it. I haven't been out on my own yet to explore, but that's coming. Settling in, getting into a work rhythm, spending time with my intended ... these have been the priorities. 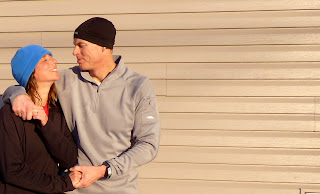 I am looking forward to connecting with the Alberta writing community. And going to plays. And films. And interesting markets. And swimming pools for lane swims: long, long lane swims. And connecting with old friends who don't even know I'm here yet.
Ah, life is fantastic.
And yesterday, yes, running in the plus degrees in my new city; my heart light; my lungs and legs feeling strong ... only one thing could have pushed it over the line and turned it into poetry: to glance over at the man beside me and honestly believe: this is the most beautiful person.
I glanced. I believed. We freaking flew.
Posted by Shelley Anna at 12:13 PM No comments: