From the air, the jungle surrounding Huatulco resembled broccoli. Dense, dark green. I could smell it before the Sunwing jet door opened like a jaw, and we Albertans walked toward the palapa-roofed airport arrivals building. We had our passports stamped, our luggage dog-sniffed, and were free.
Late afternoon. My good friend Flo had arrived an hour earlier, via Vancouver, and she was waiting for me. My first ever girls'-only trip; now I understand the appeal.
A regular-sized van waited to shuttle us to our 60-room hotel, the VillaBlanca, 4 kilometres from where 99% of the other tourists were headed: the all-inclusives. There was a little delay, as I've come to expect in Mexico. Good. Time enough to peel off my clinging pants and sweater, and slip into the linen shorts and light top I had at-the-ready.
We settled into the van and not three minutes passed before someone said "Saskatchewan," and I realized that Rhonda, the daughter of my former neighbour Ruth (in Middle Lake), and her husband Greg were among the small group. Rhonda and Greg had rented my house for a few days over the Christmas holidays in 2011. (I would also soon meet folks from Eston, SK, who knew my sister Crystal and her family.)
I am too tired to write more now. Will pick this up again later in the week. For now, here's a short video. 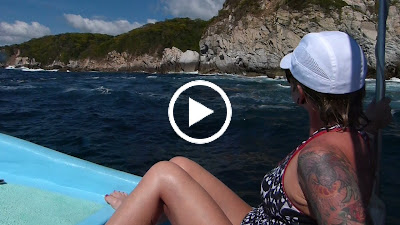