A Comedy of Chairs (with black eye).

It is relatively easy to get a black eye while buying chairs. The simple fact of the matter is that we needed to buy two dining room chairs. I have been keeping an eye out for some time, cruising the likes of Bombay, The Bay, Sears, Home Depot, Restoration Hardware, Winners, Home Outfitters, Pier 1, etc, but the second simple fact is that Zellers stores are closing, so I knew I could get the same style of chairs I have seen almost everywhere else at a good price.

[Shelley: Not always so. Look at the dishwashing detergent. Based on home trials, we've learned that the yellow-boxed NoName Freshwater Dishwaster Detergent beats the shine out of any of the expensive brands we've tried.]

So off to Zellers, in the Kingsway Mall. Yep. There they were, at 70% off. Not leather, but something almost like it, in chocolate and red (but only one red left). And some pseudo-sueded styles, too, with broader backs. A bit of flair. We purchased five chairs, and had two young Zellers employees help us out with them.

Greg was at the side door with the Subaru, ready to load. Before we got the first one -- the single red chair -- in the car, he noticed that the was super wobbly. I about-faced to Customer Service, and got my approximately $23 back.

Outside, Greg was struggling with getting the four chairs into the car.

I bent to demonstrate and at that very point I cracked my head on the car door. I collected myself in the front seat while the stars exploded in and around my right eye.

We were carrying the remaining four chairs into the house, when hundreds of tiny white beads began spilling out of the bottom of one of the fancy-backed chairs. On inspection, the bottom fabric was merely Velcroed in place, with huge gaps between each piece of Velcro.

I started sweeping. The beads travelled far and wide.

Greg couldn't get the Zellers stickers off the chair legs. They remain there still.

And then he sat down at the table on one of the new purchases. Let's just say we're going to be a lot closer to our food from now on.

And I'll be sweeping up beads until Christmas. 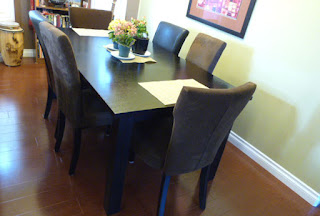 Chairs aside, Zellers, you will be missed. ﻿