Someone turned up the heat. 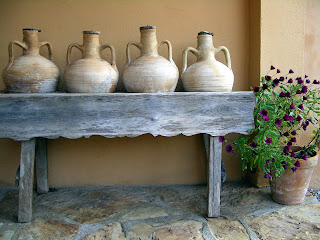 I was on my patio for 10 minutes this morning and got a burn.(Sweet.)

The writing's starting to come.

Because of waves transmuting into molten silver.

and the olive-skinned waiters

in their clandestine language

from this arena of sorrows.

Because music is still

(For example, the "Babel" soundtrack

has at least thrice saved you.)

Little things: down-payments on another year

Because four or five claim to need you …

the children, your folks. And in the village,

how long before the dog would stop

for his gambol through red-berried woods?

In a hotel bed, transfixed

by the artful shadows

of palm fronds on the opposing wall.

There must be something. Clues. At times a voice

keep on breathing. It's easy. Woman,

you are nothing special.

Then there was the secretary from Lincolnshire

in Granada's hammam. Ever more alone

with her single leg, she hopped from

with a thimble of fragrant tea.

(Later she retrieved her prosthetic leg

in a canvas bag from the front desk employee, smiling.)

and Arabic strains at the proper volume.

Because of a goddamn towel.

Sometimes you're certain the inside is out.

Anyone can see you are missing.